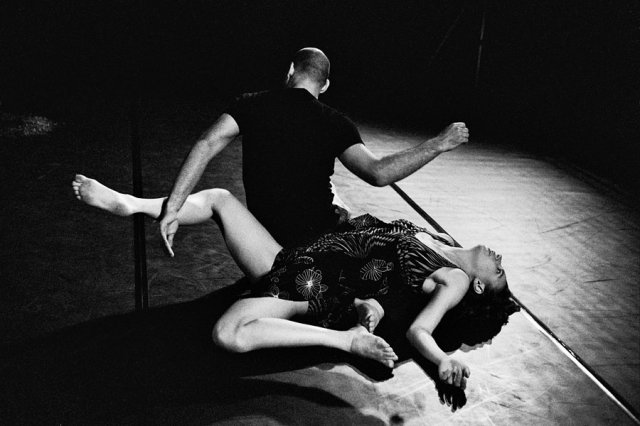 Attitudes Passionelles finds its point of departure in the phenomenon of hysteria, which at the end of the nineteenth century especially came into the “limelight” a term which is also applied to one of the syndromes that count among the affliction’s symptoms in the clinic of the French doctor Jean- Martin Charcot. Charcot assumed the role of a stage director and was able to trigger his patients’ attacks of hysteria “on command.” He could do this by touching their bodies, or by way of other signals. He deployed his ability for the organization of true and proper “performances” through which to introduce an audience of medical specialists to the complex body of symptoms that characterize hysteria. His patients, however, were also able to use this forum to focus attention on themselves: these women played a trick on the doctor and staged their personal perceptions of themselves and their disease. One wonders if the diva is a prototype, if not indeed the ideal archetype, of the female hysteric. What’s the source of the diva’s need for self-representation? And through what repertoire of gestures and movements does it find its manifestation? The diva is the mass-media embodiment of an ideal both mystic and aesthetic, a sort of modern-day Venus. In the art of the avant-gardes of the early twentieth century, women were portrayed, at one and the very same time, both as agents and as victims of destruction: both as femme fatale and hapless prey. And just as in that former period, an understanding of hysteria is here again seen as a fertile source of inspiration for an art that abandons representation in favour of the presentation of a collection of paradoxes, of a concentrate of highly conflicting opposites. Baudelaire, for example, speaks of “eyes one might describe as having lost the power to direct a gaze.”

Surrealism, on the other hand, dealt with womanhood in terms of a theatricality which found its principal characteristic in the non-observance of the lines of demarcation between the “real” and the “artificial.” It’s in much the same way that no one will ever be able to say if Charcot’s patients were “only acting” or “really ill.” Hysteria, indeed, is typified by its disregard for such borders and distinctions. It presents us, in the words of Joan Rivière, with “femininity as masquerade,” as is also clearly seen in the postures and performances of present-day female pop stars.

The “diva” persona becomes a kind of stage on which artists, male no less that female, play out an ambivalent status as sometimes subject, sometimes object. The male body too has found a solid place as media icon, at times in the guise of the male hero, at times as desirable erotic object, as seen for example, in the ads of Calvin Klein. The simultaneous conceptual construction and deconstruction of “diva-hood” here grows central: we’re dealing here with the injured, manipulated body, placed on display, which in pain, shock or shame brings us back to reality and, in doing so, produces an acute need for self-defense, as in the case of Marilyn Monroe. The diva at first takes on the character and status of what she represents, but that role threatens to jump its tracks, and to abandon control to the media. The icon, after all, should embody the ideal, and ought not to be shattered and destroyed.

The image of the diva is omnipresent: in pop culture, advertising, politics, even in religion; and this is true of every era, from antiquity to the present.

The diva is a fascinating presence that masks our desire for the other that conceals the rift and the emptiness within ourselves.