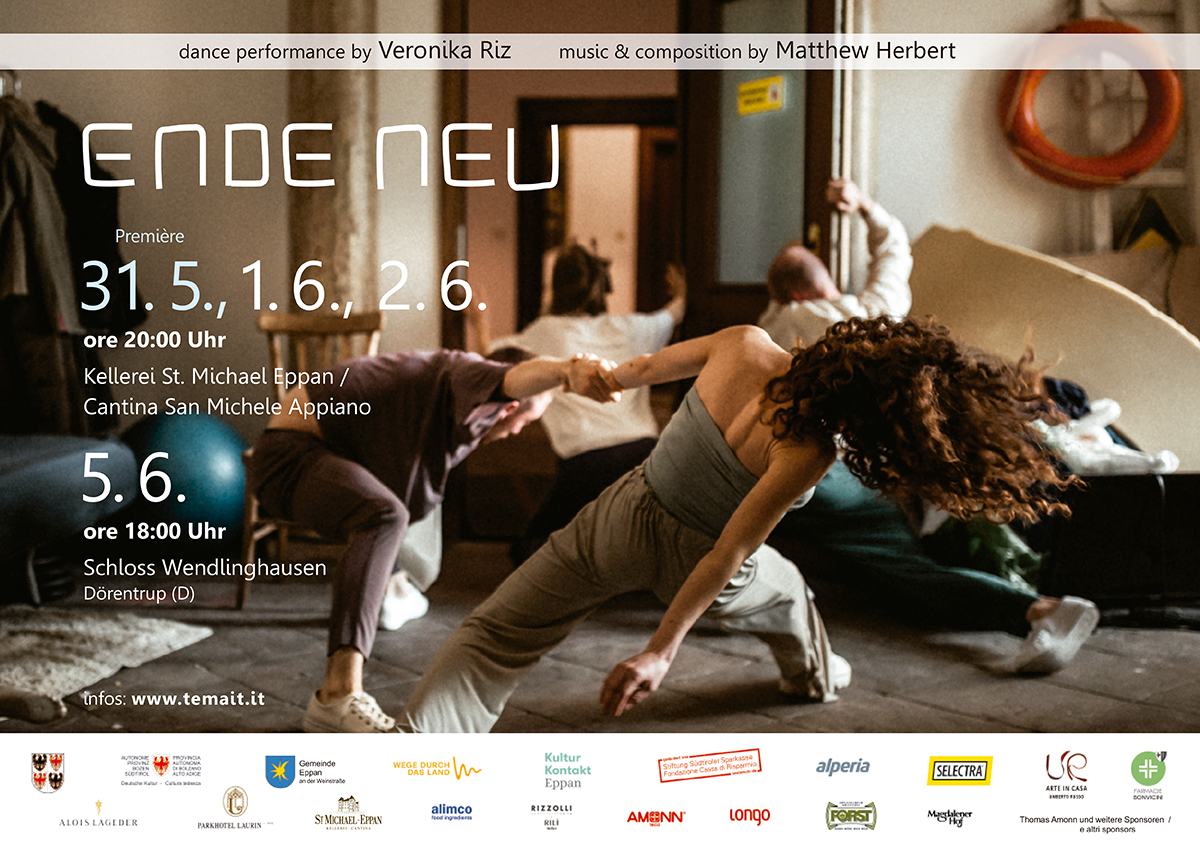 As part of the annual program 2022 of „KuturKontakt Eppan“ and in the program of the festival „Wege durch das Land“ in Germany will be premiered the dance performance ENDE NEU.
It is a piece with four contemporary dancers and three musicians in the field of electronic music. Three performances are planned on May 31 and June 1 and 2, 2022 in Eppan at the Sankt Michael Eppan Winery, followed by another performance on June 5 in Wendlinghausen in Germany.
The author Marco Gnaccolini has written the story in close collaboration with the choreographer Veronika Riz, he will accompany ENDE NEU dramaturgically.
Veronika Riz will direct and create the choreography. After the last successful production „Trequanda“, which dealt with the theme of global warming and climate change, now the theme of a world between reality and fiction, between isolation and escape, between confinement and flight.
It is of great concern to us to give great value to the music during the production.
Therefore, we choose only musicians and composers of high level. At Trequanda, a soloist of the Klangforum Wien and the Haydn Orchestra of Bolzano and Trento, conducted by Leonhard Garms, played works by Johannes Maria Staud. This time, compositions will be played by the well-known electronic musician Matthew Herbert, who will personally perform with two musicians. A video will frame the performance.
The story is dedicated to the human power of imagination and how much it shapes our reality. In a time when reality and fiction, real and fake, information and disinformation merge beyond recognition.

Four people live in a very confined space in their familiar everyday life, from which they repeatedly break out into another fictitious world. Through wanton interventions, they question the principle of cause and effect, disrupt, disturb and boycott familiar conditions and accustomed processes.
In their search for the definition of „truth“, actors and musicians throw themselves into the field between lies and truth, certainty and lostness, fiction and reality, and along the way also disrupt their own life constructs. Oscillating between finely crafted dramaturgy and absolute nonsense, ENDE NEU raises questions about how aware we are of the subliminal beliefs we live by.
Destruction is not seen here primarily as a process with a tragic end, but rather as a potential prelude to developing something new.
An algorithm, chance creates the characters of the piece at the beginning. Actually, the worlds/the lives are computer generated after all. Who controls whom? This conundrum between possibilities
remains exciting and a nice dimension to reflect human relationships. Everyday people and nerds.
Real and yet not real?
The conclusion of the piece is downright touching. It seems that technology dominates man, but in the end man is left with the decision to dominate the machine with his own emotional world.
As with Trequanda, the artist Alberto Scodro will design the space and lighting, and the fashion designer Dagmar Gruber from Bolzano will create the costumes.

Ende Neu is the name of a new Virtual Reality social application, with which you can
transform into any form of animate and inanimate life and you can access an infinite series of worlds in which you can live a series of experiential and relational adventures, either individually or by choosing to share the virtual experience by inviting whoever you want, with one rule: you can only do it with your roommate. Four friends, who have lived for years under the same roof, due to a quarrel between them triggered by circumstances of daily life in common find themselves accessing Ende Neu each to resolve various interpersonal conflicts that have arisen between them, and thus restore broken friendships, create new impossible loves, give vent to their desire for freedom and curiosity to experience a different life, until the last greatest challenge of humanity:
That of being able to beat even death, and thus be able to find a lost friend, and where the virtual world does not replace the real world, but becomes a new vital dimension of it.
A performative challenge that combines the stories of future fiction set in today’s world,
bringing to the stage an application designed specifically for the performance where choreography meets the challenges posed by the increasingly persistent use of technology in our lives and the set design materializes perhaps one of our new primary needs: to make the virtual tangible, to make unreality real.