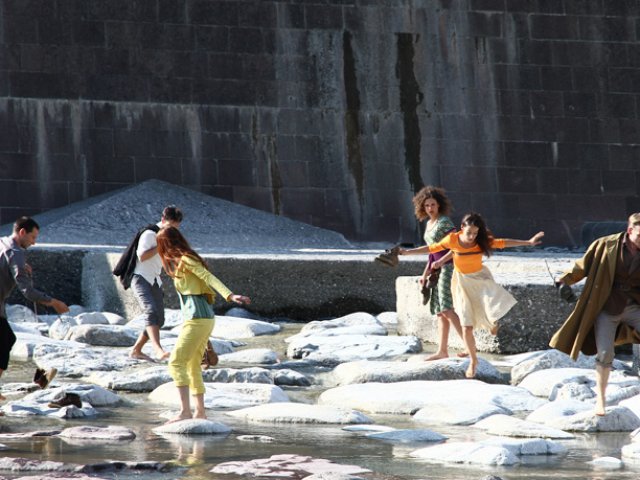 a film by Veronika Riz

In abandoned places there runs a special time – a time at the edge, a kind of limbo. They are places that exist in a gap between yesterday and today, with no more purpose of existence, they are not inhabited, but abandoned.

Seven Old Houses in South Tyrol, abandoned, forgotten, in beautiful surroundings; seven houses, half alive, half dead; a Hotel in the Dolomites, a health spa, a doctor’s villa, an ancient estate, a train station; and four dancers and a countertenor who will tell the story of these houses, performing their ghostly quest for redemption. They will only find their peace when they unite their paths and try a new beginning in a final location, a Fort far above them all. And two actors leading the ghosts. Like the houses the dancers are hanging between life and death; like good ghosts they cannot leave the circle of their house on their own.

Abandoned houses have an “air of ghosts”. In a way they are like them. Most people agree that ghosts have „unfinished business“ – they „can’t move on“ into their final peace. With human beings it usually amounts to a sudden death, an un-repented sin, something unfinished. Ghosts are condemned to flit along the endless same corridors night after night, hoping that someday somebody will redeem them, bring them to a good end. Sometimes they don‘t even know they are dead. It is only through prayer, through a redeeming deed, through a ritual that they will find redemption.
These houses share the same karma. They are neither alive (i. e. lived in) nor dead (i.e. demolished) – in a way they have died in an accident (they have been built too fast and abandoned later on). They don’t really know they are dead – a highly unnatural state. They long for some form of closure – and don’t get it. This is the eerie fascination of such places that usually, in the local tradition, become haunted houses.