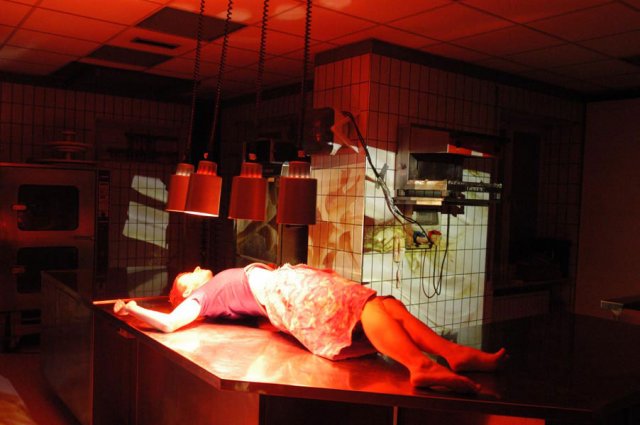 Roomers Rumours is a fragmentary artwork that weaves single scenes into a comprehensive theme. It shows no sequence of causes and effects, has no beginning, no end, no linear narration. The scenes run parallel to one another in the individual hotel rooms through which the spectator wanders, and the themes to be found in the various rooms and sequences articulate the scarlet thread that runs throughout the piece. We are dealing here with love, passion, and lust, with bliss, loneliness and ignorance, with the manipulation of the senses, all with the help of texts excerpted from Jenny Holzer’s Truisms, Elfriede Jelinek’s novel Lust, and the Kamasutra.

The role of the public is of great importance in ROOMERS RUMOURS. Like conspirators, voyeurs, and agents engaged in fulfilling a plan, they enter the various rooms and take part in the dramas to be found there, in order finally to reach the realization that reality is nothing more than a bias of one’s own point of view.

ROOMERS RUMOURS is a fabric of dance sequences in several different hotel rooms. The search for intermediate zones between sleep and wakefulness, where perception, environment and consciousness all coalesce, and where time and being are both suspended, finds its formal correlative in a cluster of momentarily captured details which in the very next room might already be very different. Even perception is challenged and disarranged by loops that can lead the viewer through a second passage through a room.

The work deploys a concentration of images, which at the very same time can generate a cool but emotional souls cape.

The images always hinge on desire and the attainment of joy, but the feelings in which one finds oneself immersed are never without ambiguities.