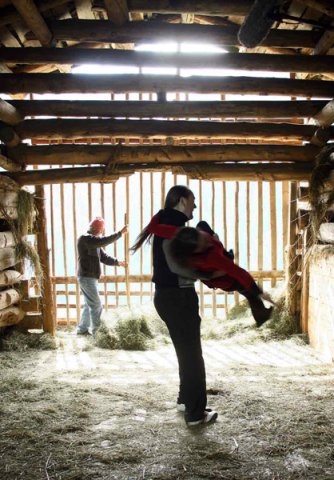 Tanzen in Südirol
A dance film by Veronika Riz

Every dance is the fulfillment of a dream. The dancer in movement no longer desires to be in any other place. The dancer has arrived. Movement thus becomes a dwelling place that unites longing and the present. All dancers make use of the repertoire of various styles and develop their own, unmistakable way of dancing from within it. Dance is a language of countless dialects, and self-sufficient traditions develop in places where peoples live in isolation. into hell.

Ragwurz portrays thirteen groups and individual dancers in the mountain farms of South Tyrol, showing dances in barns, the typical ways of life in the areas paneled parlors, the people of the region as they go about their work. The dancers speak of dreams and of special events in daily life, of ambitions to improve, of the joy experienced in movement, of the difficulty of remembering steps, of the happiness of blending together with music.

The images present the unfolding of the dynamics of every dance, and capture mood by way of unusual vantage points. Each group has been filmed in its own specific environment, and folk dances from various locales have also been juxtaposed to newer forms of dance such as hip-hop, as well as to dances from other traditions, such as the belly dances of the Arab countries.

The film depicts the relationship between homeland and movement from the dancers point of view, and thus reveals the notion of homeland to be as various and individual as the lives of individual human beings.